REAL-TIME PAYMENT BLOCKCHAIN
As the ideas initially set forth in original GRAFT white paper gradually come to fruition, we have to adjust some “game rules” as we get one reality check after another. One of the most important rules in payment processing is the transaction fee structure. Transaction fees are equally important for all players including merchants, buyers, full (RTA) supernode owners, proxy (gateway) supernode owners, exchange brokers, miners, and service providers. After several white paper editions and other adjustments, we propose the following fee structure to be implemented in the GRAFT ecosystem:

If a particular RTA transaction is processed via the payment gateway, which will be the case for most hardware payment terminals, the fees are set and calculated by the MSP (merchant service provider). This occurs through the payment gateway plugin to the POS proxy supernode using the information about the pay-in and payout currencies as input, and setting a miner fee commensurate with the service level they are obligated to provide to the merchant.

Here’s a table-form summary of various fees in combination with various workflows:

**** POS proxy supernode can be a proprietary standalone server, a part of the merchant infrastructure, or a part of a payment terminal or/and ecommerce gateway maintained by the merchant service provider. POS supernode must have a stake in order to be able to receive this reward

***** does not include the altcoin network fee

You can see that the new fees have been introduced on proxy supernodes—both wallet proxy and point-of-sale/payment gateway (a1, a2, a3, e2, and e3 in Table 1). Those changes will achieve increased decentralization of the infrastructure, which means no more complaints about GRAFT wallet downtime or delays! If you don’t like the proxy supernode cluster hosted by GRAFT, there will be alternative providers ready to serve your wallet or POS. In order to receive the reward, the proxy supernode must demonstrate the unique stake wallet linked to the supernode’s public IP address. The amount of proxy stake is 250,000 GRFT.

Another major change, which was partially proposed earlier, is the flat fee paid to the miner for RTA transaction settlements (d2, d3). The miner’s fee is traditionally calculated based on transaction record size in KB (d1). With RTAs, however, we cannot make the miner fee variable as it would make the total fee paid by the merchant inconsistent and unpredictable, which is unacceptable in most situations. Additionally, we cannot make this fee proportional to the value of the transaction (similar to the supernode fees) because miner fees are visible on the blockchain, meaning the transaction amount could be calculated from a proportional fee (although we may fix this in the future). Therefore, we made it a simple configurable flat fee, with a minimum amount of 0.1 GRFT.

The fees associated with RTA transaction with exchange brokers are the same as RTA fees (column 2) with an extra 0.25% taken by the broker (and paid also by the merchant).

The MSP sets a fee schedule that’s consistent with their business model and fees could be structured in tiers with options, for example:

Below is an example of a sample $20 altcoin transaction and the associated fees given a reference Merchant Service Provider fee schedule. 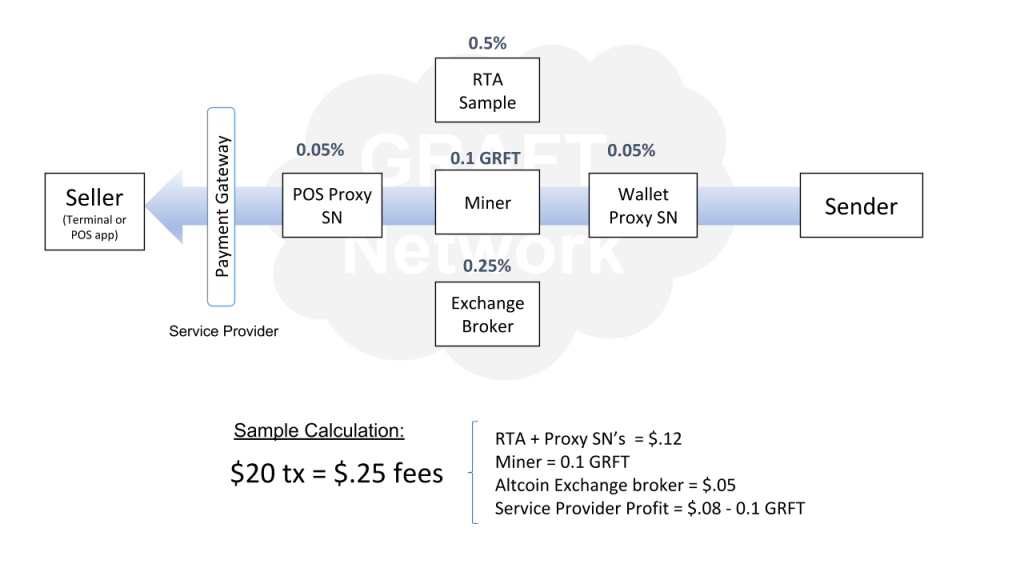