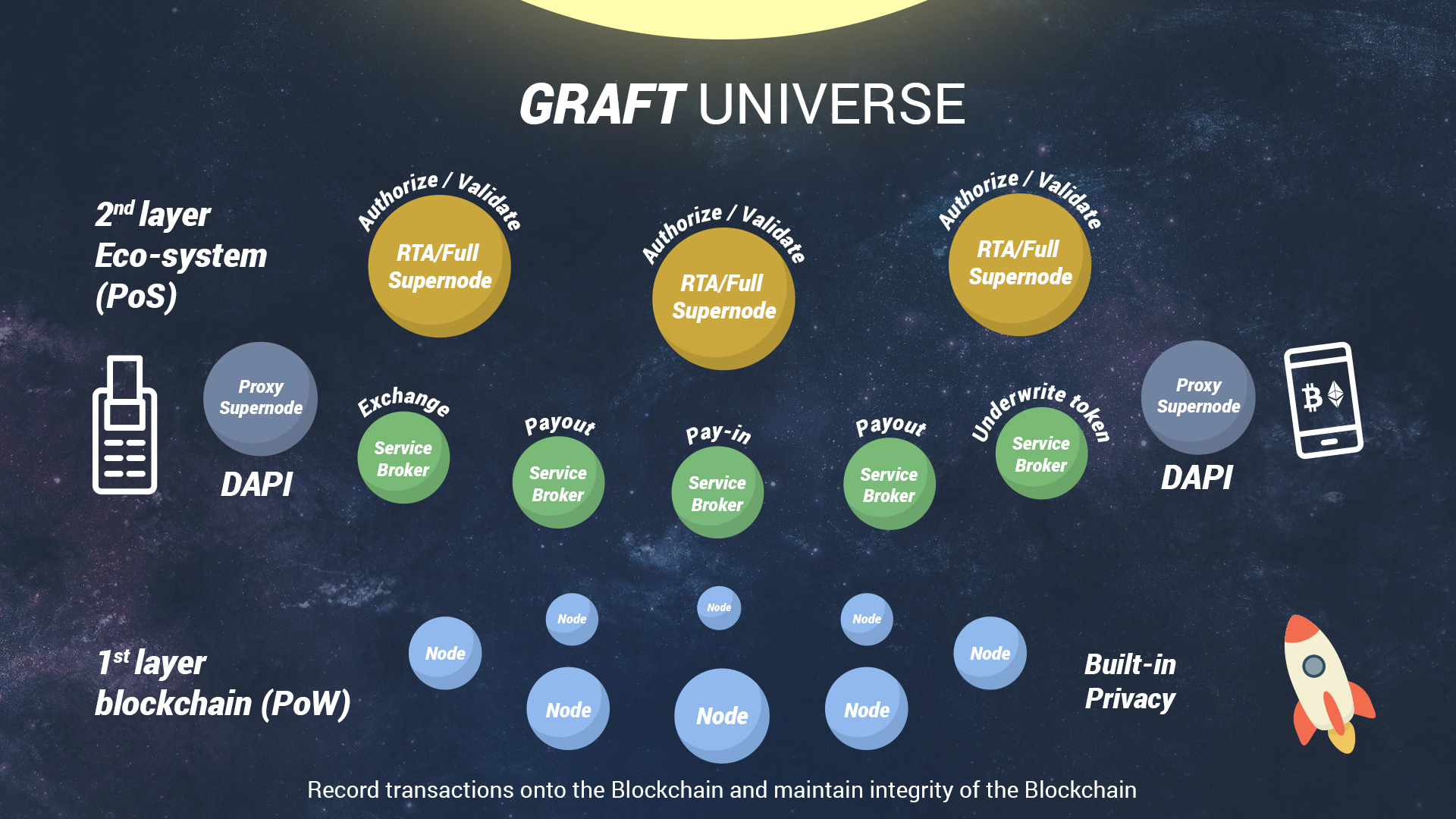 With RTA Supernodes release, GRAFT makes first step into the era of blockchain being a viable option at the point of sale, providing level of service comparable to that of the credit/debit card networks.

Supernodes (aka Masternodes) are gaining traction in the blockchain space as a mean of expediting transactions. They work by constructing a second layer network around the nodes that maintain the blockchain itself, and are able to provide additional functionality on top of the blockchain such as “off-chain” transaction processing or governance. Supernodes/ Masternodes usually run on a Proof-of-Stake model requiring staking for collateralization, and provide passive income to their owners, which explains their popularity.

GRAFT is building an eco-system of Supernodes – some are used to perform quick (credit-card speed) transaction authorizations, others to provide external system connectivity, yet others to act as service brokers performing currency exchanges and hosting various applications for merchants.

Enabling cryptocurrency to pay for goods and services has been a hot topic recently, with integrated payment providers like BitPay and Coinbase, enabling e-commerce payments via a gateway solution of their own. These services act as fully integrated service providers performing settlement and payout functions. Multiple (predominantly online) merchants have rolled out alternative payment options based on these integrated services, with most notable example of Expedia, however rolled them back citing high unpredictable fees, high risks, and lack of universal coverage. Stripe’s short-lived experiment to offer cryptocurrency payments is another example of the centralized approach failure.

GRAFT is working to give the space an equivalent of a payment network (such as the ones provided by Visa, Discover, and Mastercard) by offering a network fabric that connects gateways and services together, crossing locales and making sure the network works with existing point-of-sale solutions and payment terminals. In fact, GRAFT utilizes the recently added ability of the leading payment terminal networks to run 3rd party applications on their platforms. Most notable is GRAFT’s integration with Verifone’s Enagage line of terminals.

“GRAFT’s solution makes a lot of sense both technically and economically, staying true to decentralized model of cryptocurrency, and enabling regular people to service various parts of the network. We look at it as people ARE the network.” – said Dan I, one of the GRAFT Blockchain project leads. “At the end of the day the network functions – hosting blockchain nodes, doing authorizations / validations, providing exchange services, ensuring compliance, taking care of distribution and support, and even offering credit is best done by lots of individuals or small businesses and that’s the promise of ultimate decentralization”

GRAFT Network was originally conceived by Slava Gomzin, author of “Hacking Point of Sale” and “Bitcoin for Nonmathematicians” – some of the seminal work in the point of sale and cryptocurrency spaces. The network is designed to address all issues that cryptocurrency faced at the point of sale – speed, fee, and privacy, while taking advantage of the “smart” nature of digital money backed by the smart contract capabilities. The project is an open platform / open source and the network is free to use with the low 0.5% network fee paying the Supernodes for their service.

The RTA Supernode alpha release is scheduled tentatively for August 1st and will be released on a TestNet with the RTA test volunteer team. To sign up for Supernode testing, follow the link

More information about GRAFT Blockchain can be found on WWW.GRAFT.NETWORK