GRAFT VS RIPPLE AND OTHERS: FOCUS ON BUYERS, MERCHANTS, AND THEIR PRIVACY

SINCE GRAFT USES CRYPTONOTE PROTOCOL, HAS THE MONERO COMMUNITY INDICATED SUPPORT FOR GRAFT?

ARE TENX AND OTHERS CRYPTO CARDS COMPETITORS?

HOW IS GRAFT DIFFERENT FROM DASH?

FEATURE COMPARISON – GRAFT VS. OTHER CRYPTO-CURRENCIES FOR PAYMENT PROCESSING APPLICATIONS 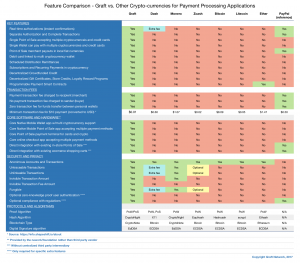 The Graft coin is called Graft (GRF), and is the “fuel” of the Graft platform. GRF are cryptographic tokens that will enable purchasers to transact and operate services on the Graft platform when it is launched by Graft. GRF is required for participation in Graft network activities, including but not limited to operating the full supernodes, which provide instant confirmations and other important network services. The total supply (maximum number) of GRF is 18,446,744. The majority of GRF will be created as a block reward by supernode operators during several years of mining. Since Graft uses combined Pow/PoS algorithm, 500 GRF will be required to deposit as proof of stake in order to operate the full supernode. For more details about its uses in the network, please see Graft white paper or/and Frequently Asked Questions.